To discover people’s emotional states worldwide, Gallup conducted a research project that surveyed hundreds of thousands of people about the feelings they experienced over a year. The findings offered surprising insights.

How do you tell an engaging story about a survey to a global audience? Instead of telling, I challenged the readers to find out themselves using a quiz.

Using a personalised quiz, I invited readers to compare their experiences with others in their country – and their country with the rest of the world.

Following the quiz, I used the scrollytelling technique to visualise some of the key findings of the survey. Simultaneously, I guided the users to learn to explore further – which they could at the end of the story.

The survey data is from Gallup’s World Happiness Report. I selected five of the ten emotions to avoid repetition. For the last quiz question –which required comparing countries– I simply ordered and grouped the data in Excel. While this question is less intuitive than the previous questions, it was aimed to be a segue from exploring one country to exploring all countries in the scrollytelling that followed.

I used Flourish to create the quiz and the other charts. I created the scrollytelling part using the combination of the Flourish stories feature and Scrollama JavaScript library from The Pudding. 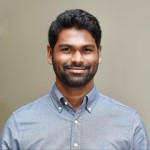 Karthik Muthuswamy is a freelance data journalist and a software developer based in Stockholm. He is a lifelong learner and has a passion for writing. After working in tech for a decade, he recently studied for a Master’s in Data journalism to explore the possibilities of using technology in storytelling.

He now creates interactive visual stories using his skills in storytelling and technology.

SPOTLIGHT: How Racially Diverse Are The Oscars, Really?

This article spotlights Ali Tehrani’s design process. This visualization was featured as Tableau’s Viz of the Day on April 26, 2021.Earlier this year, I came..

For TIME’s annual Answers Issue in 2014, the graphics department was tasked with presenting data-driven visual solutions to both simple and complex questions, and compiling..

SPOTLIGHT: Europe against Racism – in Memoriam to George Floyd

The brutal killing of George Floyd made me rethink many things. Racism is a global problem, but this incident reached a tipping point that drove..
Advertise in Nightingale
Advertising in Nightingale is the best way to get your message to thousands of dataviz professionals every day.
We offer sponsorship packages for digital, print, or a combination of both!
Email us to get started