What is the surgeon’s work? Saving lives or cutting/sewing bodies? Both. One answer refers to the what, the other answer to the how. In that vein, what is the work of the data designer? Developing charts or enabling people to better understand? You already know the answer ?…

It may seem like semantics, but it is a matter of focus that broadens the scope of your practice. This outcome-oriented mindset is a different lens through which to examine your work. The desired outcome should always be kept in mind, especially when it’s time to design projects about hyperobjects. Coined by the philosopher Timothy Morton, the term is a neologism to refer to all those phenomena which are too complex to be fully grasped by humans:

Among the hyperobjects, Morton identifies Global Warming — he refuses to call it Climate Change — as the most significant. Its global and multi-layered nature makes it feel incredibly hard to impact, especially as an individual.

“On the one hand, we have all this incredible data about them. On the other hand, we can’t experience them directly. [..]. So we need philosophy and art to help guide us, while the way we think about things gets upgraded.” — Timothy Morton

It is true. We have plenty of climate data if you bear in mind that, for instance, the first data collection on CO2 production started in 1958 due to Charles Keeling’s work. Still, it is only in the last few years that the climate issue has been highly debated and discussed publicly, thanks also to the availability of climate open data. We are not artists, nor philosophers, but as data designers, we have the opportunity and the responsibility to metaphorically open the open data, making it accessible and understandable to a wider, non-practitioner audience, utilizing it as a resource for broader climate awareness.

I am drawn to dataviz that moves beyond mere visualization, which relies on storytelling and interaction design hybridization. I call those data-enablingviz. These viz produce experiences that are not limited to seeing data, but which aim to connect the audience to the phenomena, build new knowledge, and finally raise their graphicacy level, explaining what the viz is showing. In other words, data enabling helps audiences approach hyperobjects.

Over the last few years, there have been three climate dataviz that especially impressed me. The first was the 2006 epic Al Gore elevator chart designed for the documentary An Inconvenient Truth, who remembers it?

Then, my list continues with the NYTimes project “How much hotter is your hometown,” followed by the Ed Hawkins stripe visualisation. I love these last two because readers can get personalized visual stories about their places. For instance, in the NYTimes project, “How much hotter is your hometown,” readers are asked to enter their own information to see the climate trends of their places, places they are connected to, such as their birthplace or the place their grew up, studied, or where they had fond memories. It is a clever user engagement strategy. First, it establishes an emotional connection between readers and their places, and then it builds a personalized narrative upon that connection. People, or at least me ?, are more open to continuing to read once they realize you are talking about something they care about.

In my role as designer at Sheldon.studio, we had the chance to design a project on climate change, thanks to our partnership with the European Data Journalism Network (EDJNet). They asked us to visualize Copernicus’s EU program UERRA dataset, which features 40 years of temperatures from all over the European territory. Our design goal was to raise awareness among EU citizens.

We were inspired by the techniques used in the projects above to tap into the nostalgia audiences have for their places, by revealing the impact of climate change in those places. Upon review, we realized that the original dataset was about air temperatures, without a direct link to the municipalities ?‍♂️. Then, EDJNet did incredible work to map land temperatures to the 100,000+ European municipalities, and they also published an interesting article about their methodology. Once we visualised the resulting dataset, we were impressed by its granularity; we had an incredible data storytelling weapon in our hands! An incredible climate portrait emerged from hundreds of thousands of dots. Traditional climate maps tend to flatten data, clustering it according to countries, regions, or provinces.

Relying on granularity instead, allowed us to identify some red hot spots, usually surrounded by yellow/orange ones. It was clear that each place’s climate results from many variables, such as the land use, the population amount and density, the altitude, the terrain, the proximity to water, and so on.

We spent hours exploring the dot-verse we created ??.
Apart from that data-porn moment ?, we realised the map was impressive, especially highlighting specific situations that would risk being flattened in traditional average-based visualizations. At the same time, we worried that readers might get lost in the climate dot-verse, distracted by the aesthetic experience instead of looking for and caring about their places’ climate. To address this concern, we thought of connecting a further information layer, supplying the climate change behind every single dot. We designed an informative page that metaphorically tour guides them through the story as soon as they click on the chosen dot. The page, which relies on a mix of data-generated storytelling and scroll-based interactions, reveals how the climate of a determined municipality changed over the last 40 years. The narration connects the location with the global climate. First, it compares the selected municipality climate with others nearby, then with the province, and finally, with its region. To foster a deeper reader immersion, we also designed a Wikipedia-like approach. All the places in the narration cross link to their respective pages on the platform, with the idea to foster associative navigation across places.

Some screens of example informative pages.

Once we finished designing the informative page, we conducted internal tests to evaluate its effectiveness. It worked, perhaps too well ?. We experienced a shared feeling of discouragement after reading that the climate of the places we cared about was increasing. Unfortunately, there are no immediate and effective solutions to climate change other than activating better-informed debate and broader awareness. Reflecting on that realization, we thought of supporting readers’ digital activism, providing them with tools to enable climate conversations or raise awareness among their social bubbles. We built every page to close with an informative thumbnail, ready to be shared across social networks. We generated more than 100,000 pictures that contained the name of the place, followed by the amount the climate has changed in the last 40 years. Readers were invited to share them to raise awareness among their social networks.

Despite our ironic and funny campaign to promote the project, none of the international politicians, VIPs, and influencers we tagged in our Instagram posts answered our calls… ??

Luckily, the data-enabling project we designed worked better than our social campaign ?. In fact, we started collecting posts from people or local activist groups, all over Europe, who were sharing their places’ climates on their profiles. This trend was also confirmed by our online analytics: there wasn’t one page that was more visited than others, but thousands of visits spread across as many thousands of pages, each with few visits, if any at all. This trend indicates the behavior we were trying to drive: every single municipality is a page, so thousands of visitors were searching for their individual places ?!

I hope to have conveyed the most important lessons we learned during our Glocal Climate Change design process. Based on its effectiveness, we will prioritize developing similar strategies to “hook” the readers in the next projects or leave them some tools to support them in their digital debates and promote the project. Obviously, there are opportunities for improvement on future projects. We would extend the reach with more languages. We would also update the data yearly, to turn Glocal Climate Change into a real digital resource to support broader awareness and more informed debate.

Moreover, it would be great to add a further layer of information to visualize different data connected to each place, data representative of other factors which contribute to its climate situation. The population amount and density, the cementing, the altitude, the land use, or the geographical configuration are some of the several factors that determine climate change, and that we should care about, as citizens, political leaders, or simply humans, for our future. Tomorrow will be like today, but 0.001 degrees hotter, probably ?. 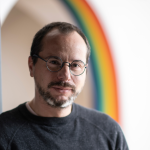 Matteo Moretti is a designer and cofounder of Sheldon.studio

Unfair Comparisons: How Visualizing Social Inequality Can Make It Worse

The Stellar Chart: An Elegant Alternative to Radar Charts

Beyond the Bar: Alternative Methods for Visualizing Two Points of Change

People love comparisons, whether between two groups or the difference in an outcome between two time points. Many data (visualization) designers use a clustered bar..
Advertise in Nightingale
Advertising in Nightingale is the best way to get your message to thousands of dataviz professionals every day.
We offer sponsorship packages for digital, print, or a combination of both!
Email us to get started